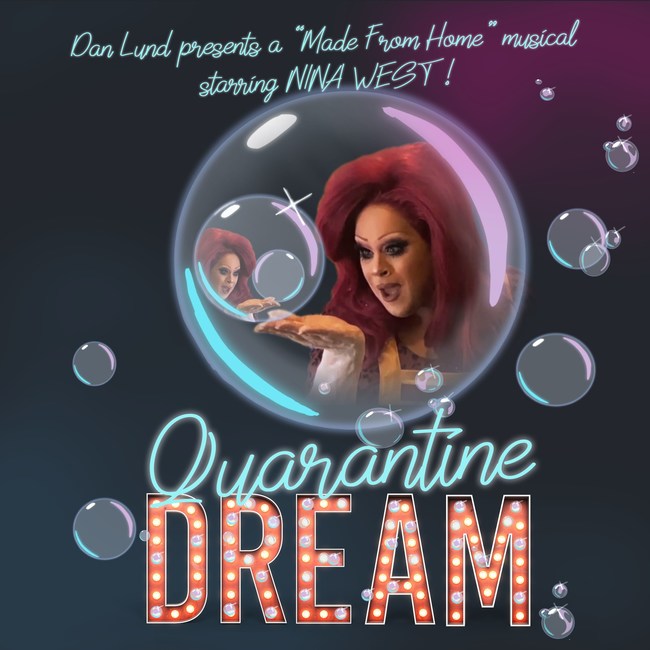 LOS ANGELES, Nov. 24, 2020  — Tuesday Nov 24th 2020 – As the pandemic continues to sweep the world, bringing a second wave of lockdowns, Drag icon Nina West and Walt Disney Studio’s animator Dan Lund ( Frozen, Frozen 2)  have teamed up to ask people to ‘Mask up, Stay home, and Watch a Musical” with the release of their new, made-at-home musical short, Quarantine Dream.

“I feel like I am my very own self-made Disney princess of sorts now!” – Nina West Tweet this

This new short fuses Dan’s 30 years of Animation expertise with Nina’s passion for the performing arts and musicals paired with an original song written by Mark Byers, West, Lund, and Patricia Taylor. Shot entirely from home during the second week of isolation in March 2020, with Nina in Columbus, Ohio using an iPhone, and Dan Lund, directing via Zoom from Burbank, California, Quarantine Dream pulls inspiration from Nina and Dan’s shared love for classic Disney movies, like Mary Poppins, that seamlessly combine live action and animation to create a timeless, charming escape. They had been looking for new ways to collaborate since their work together on Oscar shortlisted animated short “Coaster” but they never expected it to happen separated from each other, at home with most of the resources that they would usually have access to unavailable. Those limitations became an exciting way for them to flex their creative elbow grease to bring something new to life.

Quarantine Dream is a 3 ½ minute short that was born out of these trying times of isolation and quarantine. It tells the treasured story that imagination can lead you anywhere, and if you let it, you can still have an adventure no matter the circumstance. Follow Nina and her new bubble friends on an unforgettable musical journey.

“When I first reached out to Nina, I had no idea what we were going to make!” said Dan Lund. “I just knew I wanted it to feel joyful and have that Magical Disney feel! It became so much more than what we set out to do. It became a metaphor for any feeling of isolation  and how we have the power to create and execute anything our hearts desire without barriers. It made us feel good to make and now we hope it can bring that same feeling of joy, positivity and hope to you at home!”

“I feel like I am my very own self-made Disney princess of sorts now!” said Nina West. “I mean, Mary Poppins and Bert got to dance with penguins, and thanks to Dan, I get to dance with bubbles. It is so wonderful and beautiful!”

Join Nina, Dan and their bubble friends on their unforgettable musical journey…  the ride will be worth it! Quarantine Dream is out NOW and the song can be streamed and downloaded on Streaming services HERE.

Nina West is an American drag queen, actor and singer based in Columbus, Ohio played by Andrew Levitt. She rose to national prominence with her appearance on RuPaul’s Drag Race Season 11, where she placed sixth and won Miss Congeniality.

She made history at the 71st Primetime Emmy Awards in Sept 2019 when she became the first ever person to walk the carpet in Full Drag, while her season won 5 Primetime Emmy Awards including best Reality Competition Show. In June 2019, New York magazine named West one of the top 100 Most Powerful Drag Queens in America. On November 8th, she released her first Christmas EP, “The West Christmas Ever” featuring Disney Legend Jim Cummings which debuted at #5 on the Billboard Comedy Charts. Her animated short “Coaster”, was shortlisted for a 2020 Oscar, Her Podcast “Dragcast with Nina West” relaunched in 2020 with guests including Glenn Close, Patricia Clarkson, Daisy Ridley, Jared Harris, Tituss Burgess, Kristin Chenoweth, Orfeh, Caissie Levy, Pentatonix and more.

West has been performing in central Ohio and around the United States for the last 18 years, doing regional theater and of course, drag. As Nina West, she has produced over 35 main stage production shows. West hosts the annual “Heels of Horror” show at Axis Nightclub and has also hosted the competition “So You Think You Can Drag?’. In 2008, she won the Entertainer of the Year award, and was included in Columbus Business First’s “40 Under 40” list in 2018 and 2019.

Nina is a LGBTQ advocate and has raised over $3million for charitable causes in the last decade alone through her charitable foundation The Nina West Foundation. On June 17th 2020, Nina released a charity partnership with Country Music Legend, Dolly Parton – The “Dolly X Nina Kindness is Queen” Collection – with all proceeds going to the Dolly Parton Imagination Library and The Nina West Foundation to benefit LGBTQ+ youth and Illiteracy.